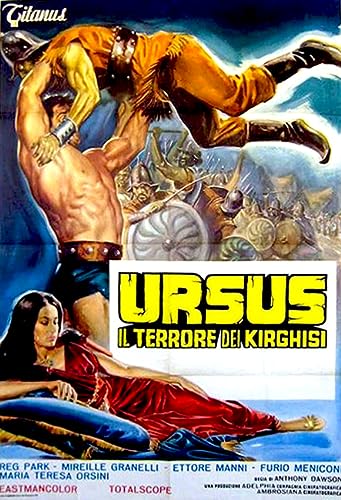 Movie: Ursus, il terrore dei kirghisi(1964)[0058712] A monster marauds the land ruled by Prince Regent Zerah, who seized power 10 years ago through the assassination of the Great Khan, fears that local hero Hercules (Ursus) may wrest the throne from him. To solidify his power, Zerah plans to marry his cousin, Amiko, daughter of the Great Khan. Amiko, however, loves Hercules. Meanwhile, Hercules, while attempting to find and subdue the monster, is badly injured by the monster. Zerah takes advantage of this situation through attacks and pillage but Hercules recovers, defeats Zerah in combat. Zerah now reveals that Amiko is not the daughter of the Khan. The daughter is Katya (Kato), a young woman rescued years ago and cared for by Hercules and his followers. The truth revealed, Amiko now openly uses her sorceress-powers to turn Hercules into the monster, just as she'd enchanted various other men in the past. Hercules (now the unwitting monster) prepares to kill Katya on Amiko's orders. When Hercules' brother, Ilo, brings about the death of... Written bydinky-4 of Minneapolis