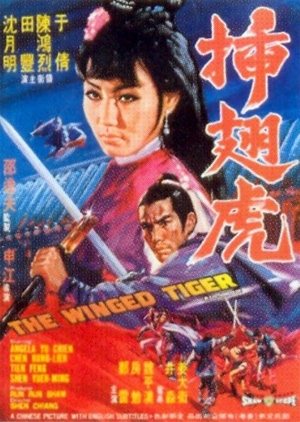 Movie: Cha chi hu(1970)[1121930] Once, the King of Martial Arts wrote a manual of all skills but, in order to prevent it being held by one person he split the manual into two parts - one holding all the even numbered pages and the other holding the odd pages. Currently half the manual is held by the Winged Tiger Deng Fei (a villainous expert in a technique which is almost like flying) and the other is in the possession of Master Yin (better known as the King of Hades). In order to obtain both copies for himself, Yin has arranged for his sister Yin Cai Fa to marry Deng Fei in return for his half of the manual. Unwilling to let one man hold all the power and keen to share the manual with the world, the Chief of Mount Hua and the heads of the martial arts schools send Flying Hero Guo Jiou Ru to obtain both copies. The plan is simple, kill the Winged Tiger to get his copy and then Guo Jiou Ru will use his power of mimicry and similar fighting style to impersonate Deng Fei and infiltrate the Yin home in order to get the ... Written bybob the moo

ckormos1 on 17 February 2019
A better title for this movie would be "The Flying Tiger" and the best "Maximum Wirework". The martial artist known as "Winged Tiger" had flying ability beyond any bird. The hero, Chen Hung-Lieh, is able to impersonate him after watching him fight once. The subterfuge was so he could obtain a kung fu manual. In the opening scene the details of the manual are explained. It was divided into odd and even pages to prevent two rival students from getting all the information. I don't know how that would be possible because the even pages are on the back of the odd pages. Anyway, Chen Hung-Lieh is the man for the job because of his "ventriloquism skills". Actually, his skill is to mimic human voices, not ventriloquism. But is he good enough to fool a blind man with the stereotypical skill of great hearing? Ngai Ping Ngo does an excellent job of playing the blind stick/spear fighter. Typically he plays doofus types or other minor characters. Here, he was good enough to upstage the veteran actor Tien Feng. The plot involves who has which part of the manual and is it a real or fake part right up to the final fight. The subplot is the romantic interest. The girl in the story seems unnecessary at first but at the end she comes out as a bigger hero than the male hero. The fights are as expected from Shaw Studios in 1970. Actors could not fight and the tremendously talented action directors and stunt men get all the credit. Overall I rate this just above average for the year and genre.