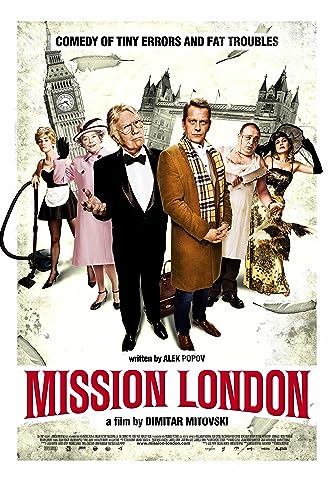 Movie: Mission London(2010)[1127702] A concert to celebrate Bulgaria joining the EU is being planned at the Embassy in London and it is the job of VARADIN, the new ambassador, to ensure the Queen attends. But with corrupt staff, criminal gangs operating out of the kitchen, falling in love with a stripper and a little misunderstanding with a PR firm that provides look-alike royalties - his simple task turns into a chaotic nightmare. Written byJohn Drydon

drakula2005 on 19 April 2010
Let me straighten this up-the movie isn't bad at all, but I think, the main problem of Bulgarian movies isn't the lack of ideas, but the lack of genre.When i walked in, the posters as well as the trailer, talked about some kind of a comedy.This isn't a comedy-it has funny moments, but one can count them easily, because they were that few.And at least 50 percent of them, and that means three, were in the trailer.The movie has politics involved in it, but it isn't a political movie either-this is a movie with fine actors, both Bulgarian and British, but without doubt, a movie made mostly for Bulgarians-there are political references, only a Bulgarian can understand, and jokes made specifically for them.The acting was one of the things i liked, but when a movie doesn't stick up to it's genre, you can't be sure, if those were one-time performances, or not.Alan Ford, a British actor, known mostly with his parts in Guy Ritchie's movies, wasn't at his regular level.He was good, but looked a little bit spooked and shy in a foreign movie.Something i liked was the cinematography-the movie was shot in great style i little bit blurry and old-fashioned, but in a good way- and that's the director to blame-hi did a fine job in this movie-making aspect.The one thing about the plot, i really don't understand is, how the ending adds up with the rest of the movie.The one thing i don't like about movies, is when it is all the same in the end.The characters haven't evolved, the whole situation hasn't been changed since the very beginning.Nothing changed, except a few missing ducks and a dead man lying on a pavement-that's all,Nothing really matters.Nothing significant to appreciate and value as useful the rest of the time.Overall, this movie isn't bad, it just isn't what it promises to be.Above average, considering all the American "movies", that are flushing out of nowhere, but could've been way better.With this fresh story, and talented actors, and the charisma one could accomplish in the middle of two different religions, traditions, cultures, worlds, this could've been a pretty memorable and intriguing roller-coaster ride.My rate would've been a little lower, but considering the obvious fact i'm a Bulgarian, i just can't rate it lower...Instead of a six, i'm giving it a seven...My rate: 6.5/10