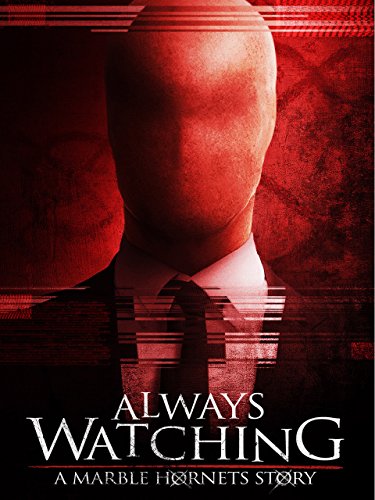 Movie: Always Watching: A Marble Hornets Story(2015)[2737926] On the hunt for an intriguing news story, a small-town news team follows a crew inspecting repossessed houses. Inside a particularly strange house, the news team discovers a box of video tapes inside a locked closet. Sensing a story, they decide to take them back to their studio. From the tapes, they learn that the family who had lived in the house was not pushed out by the banks, but fled the house in fear for their lives. Trying to decode the story, the crew keeps seeing a faceless figure dressed in a dark suit appear in the footage that causes the videotape to scramble. Their fear mounts when this figure, The Operator as he is deemed, starts to appear in their real lives, standing quietly and always watching them. Tortured and terrorized, the three crew members must track down the mystery of The Operator before it's too late.

westsideschl on 7 August 2015
Positives: Fast forwarding. Negatives: 1. Opening credits Anchor Bay distributors, known for cheap. 2. More shaky camera - I thought that technique had run its course and died years ago. 3. Journalist investigates foreclosed or abandoned homes to show what people leave behind. Boring except of course there's one house that the inhabitants seem to have vanished. Well, that plot has been done many times. And, to borrow further there is the customary box of video tapes that our journalist (and, of course, tag-along camera man) get to investigate for clues. At least that goes a small way toward explaining why there's a camera following everyone around. 4. Now for the supposedly scary part - there are a few times (mostly toward the end of course) of three or so seconds (much longer and you'll break out laughing) where some guy with a piece of cloth over his head (see photo) stands in the background. That's it. Well, someone dies (gee, who would have guessed) but it's a pretty nondescript death. 5. End of story. Not scary unless you're six. Recent alternative, if looking for someone dying, is "Faults" - a bit more intelligent.