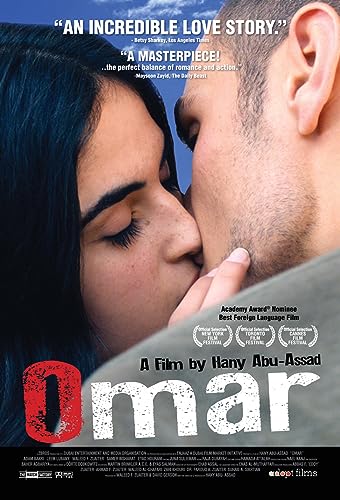 Movie: Omar(2014)[2852406] A young Palestinian freedom fighter agrees to work as an informant after he's tricked into an admission of guilt by association in the wake of an Israeli soldier's killing.

paul-allaer on 1 March 2014
"Omar" (2013 release from Palestine; 96 min.) brings the story of Omar and his friends Tarek and Amjad. As the movie opens, we see Omar climbing over the separation wall (diving Israel from the West bank) to see the girl of his dreams, Nadja. Tarek pushes Omar and Amjad to be more active in their fight against the Israelis, and at one point they shoot and kill an Israeli border guard, but it isn't long before Omar is apprehended by the Israeli police. Given the choice of being jailed for many years, or instead to be set free and lure Tarek into the hands of the Israelis, Omar chooses the latter. In a separate story line, we learn that Amjad also has his eyes on Nadja. Is Omar really going to snitch on his friends? Who will win Nadja's heart? To tell you more would spoil your viewing experience, you'll just have to see for yourself how it all plays out.Couple of comments: first, when you get a Palestine movie in which there is conflict with the Israelis, you automatically expect that this will be a political movie. Yet it really isn't the case at all. Instead, this movie looks at the conflicts of being a reluctant informant, and the resulting mind games being played. Second, this is an equally compelling family drama, with two guys chasing the same girl, of course in the context of strict family traditions and even stricter religion. Third, The movie contains a number of great performances, including Adam Bakri in the title role and the beautiful Leem Lubany in the role of Nadja. Last but certainly not least, I never saw the end coming, and it frankly was a little bit of a shock.This movie scored an Oscar nomination for Best Foreign Language Movie, which will be decided tomorrow. The category is pretty stacked this year, and I doubt that "Omar" will win. That doesn't take anything away from this movie, though, which I found compelling from start to finish. I saw the movie last weekend at the West End Cinema in Washington DC, and the early matinée showing where I saw it, was reasonably well attended. This movie certainly deserves to be seen (as are all the other Oscar nominees for Best Foreign Language Movie), be it in the theater or on DVD/Blu-ray. "Omar" is HIGHLY RECOMMENDED!