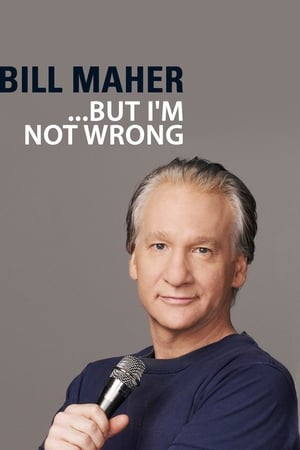 Movie: Bill-Maher:-"...-But-I'm-Not-Wrong"-(2010)[32930] In front of a live audience at the Raleigh Memorial Auditorium at the Progress Energy Center for the Performing Arts in Raleigh, North Carolina, the Emmy-nominated host of Real Time with Bill Maher performs an all-new hour of stand-up comedy. Among the topics Bill discusses in his ninth HBO solo special are: Whether the "Great Recession" is really over; the fake patriotism of the right wing; what goes on in the mind of a terrorist; why Obama needs a posse instead of the secret service; the drug war; Michael Jackson; getting out of Iraq and Afghanistan; racism; the Teabagger movement; religion; the health-care fight; why Gov. Mark Sanford will come out looking good, and how silly it is to ask "Why do men cheat?"; and why comedy most definitely didn't die when George Bush left office.