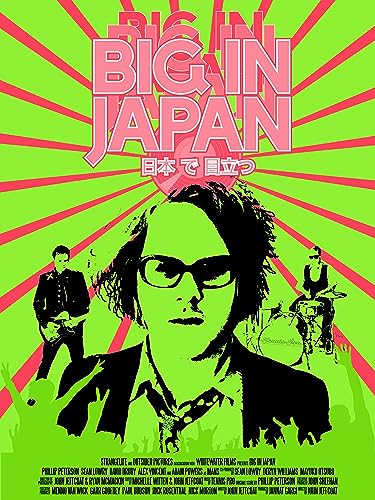 Movie: Big in Japan(2015)[3324702] Big in Japan is a rock and roll road movie about a struggling Seattle band determined to not fade away. The film, which is based loosely on actual events, follows real life rockers, Tennis Pro, as they travel to Japan- a last ditch attempt to prevent their day jobs from becoming their careers. Director John Jeffcoat (Outsourced) utilizes a fresh narrative approach, guerrilla production style mixed with an international storyline to craft a dynamic and entertaining story where music and film intersect with two cultures to reveal simple, oftentimes hilarious, universal truths. Written byAnonymous

lisagaejones on 22 September 2014
This movie is hilarious in so many ways, from the hallucinatory trip (using only Japanese cultural imagery) after drinking a mysterious Japanese cocktail, the band's sorry accommodations in Tokyo, their day jobs in Seattle, romance, band family issues, cool animation, to the massage of all massages, and that's just a smattering of plot elements. The movie answers some tough questions, such as, Can you really sell a beat-up van and reap enough money for three people to travel to Japan? What old Seattle band is the most popular band in Japan? Why is Nirvana such a disturbing word? Will your wife feel okay about you sharing a room with a hooker? If you fall asleep at a bar in Tokyo what happens? What tattoo would you get in Japan if you had nothing else to do? Did you know that record execs are not very loyal? Can cello music make you cry? Believe me, you'll find out. Happily, this is not another "mockumentary," but a movie about a real Seattle band that isn't making it anymore (if it every did) and wants to try one more time to be huge ...somewhere! I am a boomer and though the music and grunge references are not a big part of my life, that doesn't matter. If you love music, road trip movies and the genuinely bizarre, you will enjoy yourself immensely watching "Big in Japan."

My Talks with Dean Spanley