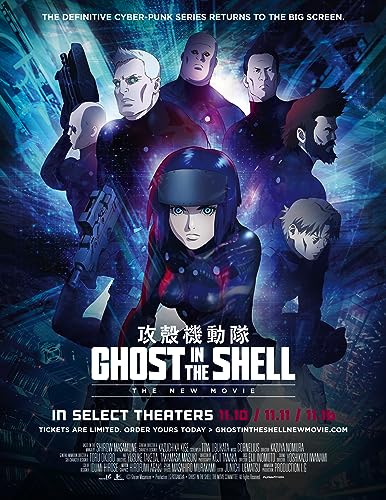 Movie: Ghost in the Shell: The New Movie(2015)[4337072] In the year 2027, a year following the end of the non-nuclear World War IV, a bomb has gone off in Newport City, killing a major arms dealer who may have ties with the mysterious 501 Organization. Public Security official Daisuke Aramaki hires full-body cyber prosthesis user and hacker extraordinaire, Motoko Kusanagi, to investigate.

TheMovieDiorama on 2 March 2018
Whilst the original had philosophical depth and an easier narrative to follow, this instalment of the Ghost in the Shell property removes all of that and focuses on the action. Major and her squad of cyborg terminators must find out who is behind the prime minister's assassination, the only problem is, it was a computer virus, so it could be anyone. Sounds intriguing yes? Well half of it was interesting. I loved the technology used in this future, especially the virtual reality crime scene recreations. The world is thick with futuristic cityscapes and small details that obviously has had care and thought put into it. The action scenes were exciting. The animation was fluid, I mean I'm no anime expert by any means, but it's definitely one of the best looking anime feature films I've seen. The story itself, although hard to follow, was fine. Corrupt government officials and shadowy organisations, its heavy going. That's my problem. It's so heavy that I struggled to keep up with who was who and what was what. A minimal amount of character development, Major's squad members have little to no introductions that I honestly did not who they were. I couldn't tell you any of their names except Batou. Seemed like an odd choice to have the audience automatically presume who they are, then I did some research. This film is a continuation of the Arise story arc. I haven't seen the Arise chapters yet and the bluray does not tell you that this is an instalment in that series. So no wonder I had no idea what the heck was happening. How is anyone supposed to know this without having to research it beforehand? That's just misleading information. So whilst this film is visually arresting and action packed, it's too heavy for its own good that it left me completely unengaged. Lesson learnt: research a film before buying.

Ghost in the Shell 2: Innocenc

Ghost in the Shell: Stand Alon