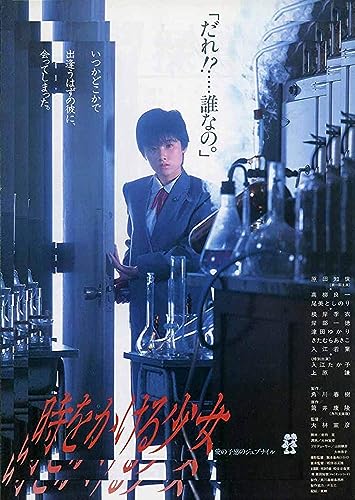 cherold on 9 September 2013
I'm used to high quality Japanese movies - this is the country of Kurasawa, after all - but it shouldn't have surprised me to discover that there are Japanese movies from the 1980s that look as cheaply and artlessly made as a teen-themed 1980s TV series. What surprises me is seeing other reviews that like the way this was filmed, and to discover through wikipedia that this was done by an experienced director who has been successful in his field. Because this is as pedestrian-looking as you can find, and lacks any sort of tension or interest or, in the subtitled version I saw, interesting dialog.This was the sort of movie you can tell isn't going to be any good from the first instant, but I was interested in the story because I'd recently watched the terrific animated version of The Girl Who Leapt Through Time, which is a sequel, and I wanted to see a version of the original story. So I thoughtI'd just wait until the story kicks in. But the story doesn't so much kick in as slowly, slowly, slowly creep in.At one point about a half hour in I gave up, but then I watched the sequel to this - Time Traveller, which is much better - and that made me even more curious, so I started half-watching while reading something (which is hard to do with subtitled movies, because you have to keep looking up). Even though I was entertaining myself in other ways, the movie still moved about as slowly as any movie could. It felt like they were trying to expand a 20 minute short into a full featured film entirely through long pauses, slow talking, and filler dialog.Still, the movie does become slightly more entertaining as it gets into what there is of a story. Unfortunately, it also gets increasingly far- fetched, and a final big time jump is a senseless and bewildering hodgepodge that severely tried my patience. The leads are so bland that their pseudo-romance fails to resonate; in fact, the only affecting scene in the movie is one near the end involving two minor characters. It's altogether irrelevant to the story, yet it was the only worthwhile moment in the entire film.This is one of the worst Japanese films I've ever seen, poorly made in almost every way. It boggles my mind that other people here enjoyed it.