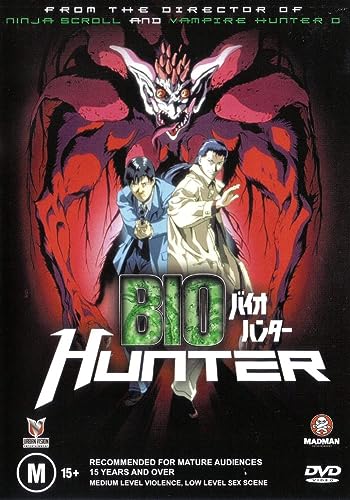 Movie: Bio Hunter(2005)[tt0220333] Two scientists attempt to distribute the cure for a demon virus. However, things become complicated when one of them becomes infected, triggering a battle within himself as he attempts to not only control his demon side, but also save the lives of others. Written byJosh Wunder

lost-in-limbo on 19 February 2019
Demon virus busters!!! This OVA follows a routine narrative structure, yet the inner workings of Yoshiaki Kawajiri's punchy writing dynamics establishes engrossing core characters, draws upon mythical meditation counterbalanced by scientific lore and gruesome horror escalating into a whirlwind of dazzling inner demons wanting to breakout. And some do in grisly fashion! How these aspects arrive and come together, gel perfectly with director Yuzo Sato's eye for details and story pacing. Never once did my interest dip, because I was so invested in the on-screen interactions and metaphysical tailoring. It was well-written with moments of snappy banter and a strong basis, which never succumbs to any sort of tawdriness, or complexity.Two molecular biologists, Komada and Koshigaya have day jobs lecturing at a university, but on the side they're self-proclaimed bio-hunters who track-down, or receive call-outs to those who are infected by the unusual demon virus that transforms humans into hungry demons with special powers. Soon they find themselves dealing with a mysterious lady, who somehow shares a connection with a mighty strong demon terrorising the night streets of a Tokyo ripping open young women to devour their livers.The fascinating facet here, is that Komada happens to be half-human, half-demon, as he was infected by the demon virus. However his human qualities are able to control the hunger of his demon side, not without some growing pains, but in spite of it, this ability can help him sense out demons which makes it easy for the duo to do their jobs. It gave the character another dimension to work off, especially his inner battle over his responsibility to this infliction and desire to live a normal life. The final image, after the insane encounter with the chief demon, tentacles and all. Had him walking away from possible happiness painting the heartache, but also the fear of what he is, hanging over his head. His needs, while there, aren't important, as the dedication to his work is his safeguard. And the otherworldly experience brought upon by the final demon encounter heightened those senses to shut himself away.I really enjoyed the interesting combination, and character shades between Komada and Koshigaya, as I found it to overshadow everything else. Yep, even the nasty demons and their messy aftermath. This included the strong opening and closing sequences. Whenever the demons are on the screen, the way the virus attacks the human genetic code causing the infected to morph, or grow monstrous deformities with a life of its own had me thinking of a few of Rob Bottin's practical effects from The Thing. It's just uncanny. Well, excluding Komada's demon transformation, which is a neat looking design. The music score hits all the right notes, at times, quite haunting and the animation looks good. I just wish it was longer.