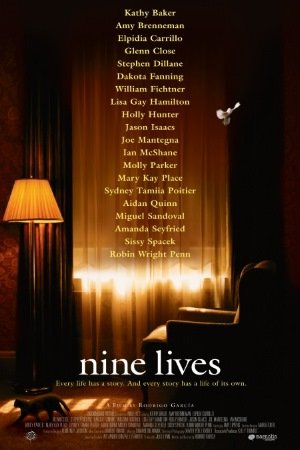 Movie: Nine Lives(2005)[tt0420015] Captives of the very relationships that define and sustain them, nine women resiliently meet the travails and disappointments of life.

JuguAbraham on 19 December 2005
Director Rodrigo Garcia is the son of the famous writer Gabriel Garcia Marquez. Brought up in a literary environment and choosing another medium of communication--the cinema--for himself, the son uses the tool of the father to chisel away at sculpting good cinema. Spoken words, characters, relationships play a major role in the finished product that a reader of Marquez would find easier to appreciate than others.Ostensibly, the film is collection of 9 short stories or vignettes of 9 different women. In the first four, some characters appear in other episodes. The last five are connected by the word "connection". The last of the nine remains the most difficult and intriguing and an appropriate one to end the film.The film captures each of the nine segments in a single shot without a cut. The film resembles various works of Robert Altman--even the long-shot of "The Player"--and the structure of "Magnolia" and "Crash." What "Nine Lives" has that the others do not is the Marquezian element of magical realism.To explain this one has to begin at the final episode. "Nine lives" alludes to the cat. A cat is shown on a gravestone. A mother (old enough to be a grandmother) escorts a young girl (her daughter) to a grave and brings with her not flowers, but a bunch of grapes. She leaves the grapes behind on the grave. The final shot does not show the girl but the mother alone. Whose grave is it? Is the young girl real (or alive)? Did the mother bring grapes for a child who loved grapes, who is now merely a memory for an old woman? The stories are interconnected by relationships (mother-child) episode 1 and 9, parents and children (2 episodes of Holly and Samantha), husband and wife (Camille) and the trio of husband, wife and lover (Diana, Lorna and Ruth).To savor the richness of the film, one has to go beyond each segment and look at the links the director provides to see the breaks in relationships and the ultimate reconciliation the full film provides. In the first episode, the viewer sees a break in the relationships. In the finale there is reconciliation even in death. In between, divorced couples consent to sex, a young teenager appears to be more sensible than her quarreling parents by giving up a chance for better education to keep the fragile family together, and another fighting couple remind you of Albee's George and Martha in "Who's Afraid of Virginia Woolf?" An abused daughter realizes she cannot kill her father. A faithful husband helps his wife get emotionally ready for a mastectomy.If there is a flaw, you can point out that it looks at nine women rather than nine men. But then in literature, cats are associated with females rather than men, and the director was born to a family who appreciated literature.There is little that is spoken in this film. But each word is important to understand and enjoy the film. It is a film that deserved the Locarno Film festival honors. Personally, I loved the performances of Glen Close, Robin Wright Penn, the lovely Amanda Seyfried, Elpida Carillo and Ian McShane. But the entire cast was great--like any Altman film. Garcia, unlike Altman, stresses on the spoken word, not merely the images and music.I saw the film at the recently concluded Dubai Film Festival. Was it a coincidence that Marquez's friend and Chilean filmmaker of repute--Miguel Littin--was outside the cinema hall trying to get a feel of the reaction of the audience to film made by his friend's son without being noticed?

Things You Can Tell Just by Lo