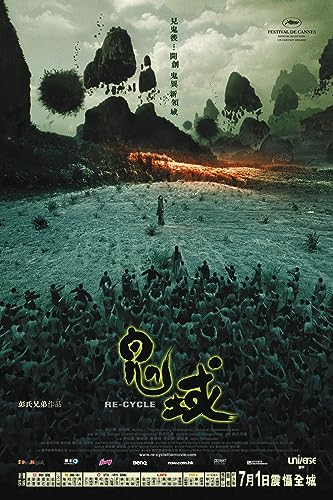 Movie: Gwai wik(2006)[tt0498311] After writing three best-sellers about love story based on her own experiences, the successful writer Tsui Ting-Yin is without inspiration and having difficulties to write her new novel in the horror genre entitled "Re-cycle". While drafting the text, spooky events happen at her apartment and her former boy-friend of eight years ago visits her, after his divorce, proposing Tsui. When Tsui sees a supernatural long-haired character of her book, she follows him and is trapped in his world of terror. But she is saved by the young Ting-yu, who discloses a secret about her to Tsui. Written byClaudio Carvalho, Rio de Janeiro, Brazil

Leofwine_draca on 27 August 2015
Trust the Pang Brothers to come up with something unique and unsettling all in one go. I've been a fan of the directors even since I saw THE EYE, and RE-CYCLE continues in the same sort of style, albeit with a twist. The central character is a tormented novelist who finds that her apartment is haunted by a long-haired female ghost, but it turns out to be merely the precursor to an even weirder storyline...RE-CYCLE begins as a traditional ghost story in the vein of THE GRUDGE before turning into a dark fantasy that has more in line with SILENT HILL. The storyline is very slim and rather stretched to fill out the running time, and the central character is rather unlikeable. However, both these things are secondary to what is an almost entirely visual experience, and one quite unlike anything you've seen before.RE-CYCLE transports the viewer into a weird kind of afterlife populated by forgotten things: the forgotten dead, forgotten toys, even aborted babies in a political sub-plot. Aided by some not-bad CGI effects, the main character wanders through this weird landscape, trying to make sense of what she discovers. The twists may be obvious, but for a film filled with ghosts this has many scare scenes. The ghosts look frightening, even if they're CGI, and this film manages a lift set-piece that's very nearly as scary as the one in THE EYE; not quite, though.