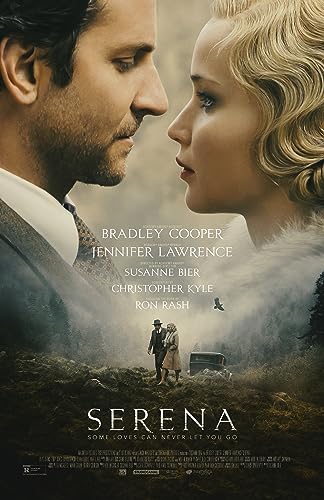 Sergeant_Tibbs on 26 October 2014
Trainwreck is a strong word. Average is another strong word. Mediocre sounds about right. Serena isn't necessarily a film that Bradley Cooper and Jennifer Lawrence should concern themselves with burying, it'll be forgotten at the bottom of the bargain bin in no time, but it's not something to be proud of either. Director Susanne Bier, whose 2010 film In A Better World won the Foreign Language Oscar, just doesn't seem to know what to do with the material and it's a tonal catastrophe. Set in Depression-era North Carolina, the story focuses on entrepreneurial newlyweds George and Serena Pemberton, played by Bradley Cooper and Jennifer Lawrence respectively, as they struggle to maintain their timber empire in the face of betrayal from their closest allies. Life becomes complicated as Serena cannot bear children, but before they met George had already impregnated one of his maids. It's a power struggle of greed and corruption between all involved and leaves a startlingly bloody trail. Unfortunately, Jennifer Lawrence's performance is all over the place, up the walls and on the ceiling. However, it's not necessarily her fault. She has more understanding of Serena than Bier seems to have and ultimately she's at odds with how her character is presented. Lawrence plays Serena cold, robotic, calculating, to the point where she seems disinterested. She's a sociopathic and manipulative character. But Bier wants our hearts to ache with pity when she's on screen, emotions difficult to muster when it works better on a psychological level. A slight tonal adjustment more aligned to the way Lawrence is playing could make our skins crawl when we see her, and be much more compelling for it. As a result, Lawrence just feels way off. Random bursts of tears and screams don't help consistent characterization, not even fitting to the mould of the sociopath. The editing isn't her friend. The film is littered with continuity errors and she amusingly keeps darting across Cooper's shoulder. Their chemistry is as tender as ever, their sweeping romance is much less so thanks to skimming over every detail. The film would've been a decent (if mild) psychological thriller if it played its cards right and wasn't concerned with any sentiment. But would Lawrence have been better if the style was adjusted? Perhaps slightly. The complaints about her not fitting the time period are valid, but not glaring. As an actress, she's still unpolished potential, and has at least improved since she shot Serena, but Bier's direction fails her. Not to completely blame others, her character is a disaster on everybody's shoulders. However, in the film's third act it does come to its senses and finally realizes what kind of story it is, but the execution is still very weak, lacking any tension or spatial awareness on how to shoot its most kinetic scenes. It feels like there is a decent film buried underneath there somewhere with all its dynamics, maybe a couple more drafts away, maybe a couple more takes, maybe a more intuitive editor behind the wheel. But the potential is lost. Perhaps a road closer to Foxcatcher's gritty authentic realm would've made for a more engrossing film, but that tone is far from its interests and selling points. On the other hand, Cooper is solid. Nothing great, he too has evidently improved since the shoot. He's easy to buy as this character of someone who could have the power to run an empire, and be the type of person who would fall for Serena and eventually be manipulated by her. His acting process as he confronts his moral dilemmas is laid entirely on screen, given that the film offers many shots of him just thinking. But he's immersed enough in the character to make it work. He is a touch too unlikeable to invest in given his corruption, but he makes the whole thing a lot more watchable than it could've been. Alas, peripheral characters are starved of development. Most glaringly is Ana Ularu, ostensibly a key character as the mother of Cooper's child, and she's given literally nothing to do but share venomous glares with Jennifer Lawrence. Rhys Ifans is solid, but his character is written too idiotically to take seriously. Toby Jones toes a fine line between being too self-aware, but it's David Dencik who is the most radiant of the cast in his screen time. Not that he's a fascinating character, just happens to have the most convincing conviction of the ensemble. I want to time travel back to their set and leave the crew a tripod because if there's any way to devalue millions of dollars of (lovely) production and costume design it's giving the camera to Jimmy Tremble Fingers. It's like a Kathryn Bigelow film, constantly but only slightly shaking with the camera settings making the frame flicker every other shot. The film is void of any cinematic atmosphere. It's such a shame because when the second unit shoots the astonishing static vistas of the Smokey Mountains it gives me hope that it could be an attractive film. But there's no grace to be found otherwise. Serena is just a ferociously sloppy film. The biggest sin is how it enters dark territory without embracing it, feeling as though it's in denial of how brutal its story truly is. The attempts to be poetic in its imagery are laughable and the film often ruins decent moments with trite cringe- worthy lines. Nevertheless, it isn't an unbearable film, if 'not always bad' can be a compliment. There will be some people who can ignore these flaws and like it for what it is. It doesn't quite deserve the lashing it's suffered so far, but lets just quietly put it back on the shelf. 4/10

The Devil You Know

House at the End of the Street