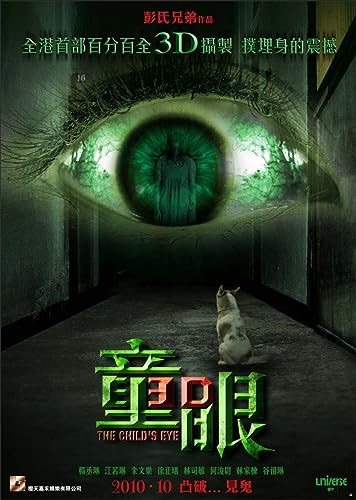 Movie: Tung ngan(2010)[tt1314170] A group of friends find themselves stranded in an old hotel. As they uncover the history beneath the walls they're slowly drawn into its sinister past making it harder to get out alive!

paul_haakonsen on 12 March 2011
I was excited to watch this movie for two reasons: 1 - it is a Pang Brother's movie. 2 - it is an Asian horror movie.However, having seen it I set here with a sense of disappointment and that I was somehow cheated out of something.For a Pang Brothers horror movie, "Child's Eye" is fairly disappointing and uneventful. It doesn't quite live up to previous movies such as "Ab-normal Beauty", "Re-Cycle", "The Eye (trilogy)", etc. It has that certain Pang Brothers feeling to it, but it doesn't quite deliver like some of their previous works did. I surely hope that their next project will be more wholeheartedly.The story in "Child's Eye" revolves around an old, run-down hotel in Thailand, where a group of young people from Hong Kong get stranded and are drawn into the dark, sinister story that is tied to the place. Sounds great, yes, but the story turned out to be rather jumpy, confusing and didn't fully have a red line throughout the feature length. Which made the movie somewhat of a pain to sit through.As for the sets and props, well here it is the usual Pang Brother's standard. Lots of really nice sets and decorations. They sure have a good touch for details, and manages to get everything working well together. Despite it being shot in relative dark surroundings, the use of lighting in the movie is really phenomenal. It adds a great sense of dread and mystique to the movie.The cast in "Child's Eye" were good as well. I have watched a lot of Hong Kong movies, and I am fairly unfamiliar with these people. But still, they did a good job with their roles. Most noticeable was Rainie Yang, as she sort of had the lead role, so to speak.Now, one thing puzzles me in the movie, why did everyone speak Cantonese? They were in Thailand. Still the doctor in the hospital was speaking Cantonese. That was just a bit too cheesy. And the scene where they went through the "portal" and came out somewhere else, where you see buildings crumble and such, that was just too much. It looked like something that should have been in an entirely other movie. That was so misplaced in "Child's Eye". Seemed like a chance to just show off some CGI skills."Child's Eye" was a disappointing experience for me. It was a step backwards for the Pang Brothers in my opinion. The story was not well put together and it was too messy. But hey, you can't expect all Asian horror movies to be great, and even great film makers can deliver top quality with every single movie. It is good in a way that they moved away from their usual niche of movies, artistically speaking, but a bold move in a way as well, because the audience might not like the turn of events.This is not a movie that I will be returning to for a second viewing. But hey, if you like Pang Brothers, you should check out "Child's Eye", you might just like it.