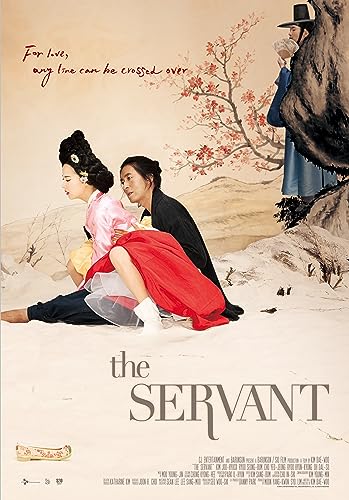 Movie: The Servant(2010)[tt1905059] The handsome servant of a powerful nobleman schemes to win the heart of the geisha they both covet, but soon finds that the object of his affections may have a scheme all her own. Bang-ja works for Mong-lyong, and they both lust after Chun-hyang, who plies her trade at the a geisha house. When Bang-ja learns that his master longs to claim Chung-hyang for himself, he seeks the wisdom of a wise old relationship expert named Ma to learn that secrets of seduction. Later, using a combination of Mencius and Confucian Analects to charm Chun-hyang away from Mong-lyong, Chun-hyang becomes just another step in the cunning beauty's clandestine plan to transcend her current social status. Written byJason Buchanan

DrdownunderMum on 9 March 2012
Last year I was incredibly fortunate to see this adorable movie when it premiered at The Korean Film Festival in Auckland. It was showing at The Academy, which is an informal art-house cinema in the basement of The Public Library. I was the only non-Asian person there too. For a "Frock Movie" fan like myself this was the most wonderful experience. The lush locations, hyper-color cinematography, the superb costumes and beautiful set dressing alone, make it a must-see. The surprising thing about the story, is that it is a comedy. I might not have realised this watching it with just English sub titles. The audience at the festival were laughing a lot. It appears it is a spoof of a traditional story which everyone knows. The script is very tongue in cheek and a bit anarchic. Think 'Blackadder" view of historical events as a comparison. I wish this genre of films were more easily viewed. I am back in Cornwall now and there is no way I would have seen it here.