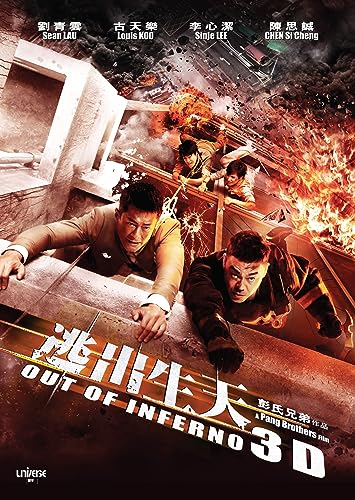 Movie: Tao chu sheng tian(2013)[tt2957680] On the hottest day in 50 years, a serious fire incident happened to a busy commercial tower, a gaggle of fire fighters with an indestructible enthusiasm are going to save lives.

paul_haakonsen on 13 April 2014
"Out of Inferno" turned out to be somewhat similar, if not a little bit better than "Backdraft". Why? Well, this was pure action and thrills, whereas "Backdraft" was weighed down by drama and a somewhat laughable story.Imagine a towering commercial building set ablaze with nowhere to run, whilst fire is consuming the lower levels, but also spreading on the levels above you. Then you have "Out of Inferno".The movie was quick to pick up pace and keep going at that pace, not really becoming dull or boring at any point.However, one thing did puzzle me, since this was a Hong Kong movie, why was it shot on location in Thailand and China? It would have made more sense had it been filmed on location in Hong Kong, also by bringing more familiarity to us who are familiar with the places in Hong Kong (as I have lived there), but instead they opted to shoot in two different non-related places. That was just stupid.That being said, then the performances in "Out of Inferno" was quite good, and there were some pretty big names to the cast list, some Hong Kong heavyweighters, if you will. Ching Wan Lau, Louis Koo and Angelica Lee performed quite nicely together in this movie.However, for a Pang brothers movie, then "Out of Inferno" wasn't quite up to their usual standards. For some reason, perhaps it is just my own personal opinion, then they make horror and thrillers better than they make action movies.The name of the movie was a little bit ridiculous, but hey, that is just a matter of personal preference, of course."Out of Inferno" is well worth a watch if you enjoy Asian cinema.