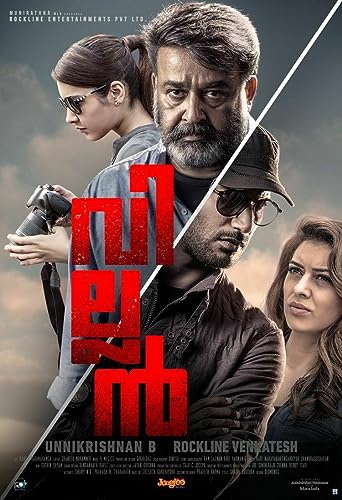 Movie: Villain(2017)[tt6616800] Three men are murdered by a killer who teases the police department with his flawless crimes. ADGP Mathew Manjooran is called in on his last day to investigate the case. When three more men are killed in the same way, Manjooran is pulled into a deadly game of cat-and-mouse. Written byShrinivas G. Kulkarni

arungeorge13 on 28 October 2017
'Villain', written and directed by Unnikrishnan B, had been in the news (ever since Mohanlal shared the movie's first-look poster featuring himself in a salt & pepper avatar on his Facebook page, to be precise) for a number of reasons: (#1) It's the first film in India to be completely shot in 8K resolution (Manoj Paramahamsa and N.K Ekambaram wield the camera), (#2) It's the first Malayalam film where color-grading was done during filming itself, (#3) The record amounts it earned in terms of overseas distribution, music and satellite rights, and lastly, (#4) The massive star-cast (comprising the likes of Manju Warrier, Vishal, Hansika, Srikanth, and a horde of popular Malayalam talents on board). The writer/director chooses to narrate the story of ADGP Mathew Manjooran (Mohanlal) by mounting a reasonably large canvas with a wide array of characters, attempting a rather subtle mishmash of genres (crime/drama/thriller/family) well within his comfort zone (we saw Lal-Unnikrishnan duo churn out 'Grandmaster' five years ago, which was quite alright). The story primarily alternates between Mathew's past and present: Mathew has suffered a personal tragedy due to which he has been away from duty for nearly seven months, and when he eventually returns to work, he surprises everyone by opting for voluntary retirement and decides to go on a 'journey of healing'. On the other end, a trio of murders have taken place in the city of Trivandrum and the police-force look up to Mathew for his expertise in cracking the case. There isn't a whole lot of novelty in the storyline or its presentation to boast of. The basic concept is in fact, rehashed from plenty of other films in the cop-thriller genre. The police procedural bits are undoubtedly the best; the delightful strewing of clues and red- herrings in the first half manage to keep the viewer sufficiently engaged (even though not on the edge of their seats). However, the audience soon realizes that Unnikrishnan isn't exactly interested in building mystery around the identity of the antagonist (which usually arrives in the form of a twisted-reveal at the end), but to break shells on the traditional notions of 'hero' and 'villain' through philosophical exchanges and slight overdose of sentimentality.The genre-thrills are practically absent in the latter half and predictability begins to play spoilsport. What drives an investigative thriller forward, even with the antagonist-reveal coming in quite early, is how the protagonist pieces together the whole ordeal and when things start to make sense, without logic having to take a beating. 'Villain' unfortunately comes well short of fulfilling those expectations and struts along in a strictly straight-forward fashion. Certain characters needed better writing: Shakthivel (Vishal) is pivotal to the narrative but the reasons for his actions are explained in quick flashback montages with voiceovers - not even close to making the viewer discern the vehemence of his transformation (from doctor to psychopathic killer); Shreya (Hansika) the girlfriend of Shakthivel - their relationship would have made quite an exciting story but isn't fully explored into; Felix (Srikanth), a drug-lord who seeks redemption against Mathew (for his earlier exploits), appears more like a one- note cardboard wrongdoer.Mohanlal proves why he is still the undisputed acting champion of India, with a bravura act that is tremendously restrained from start to finish. Even though Mathew quotes philosophy (and Shakespeare) a tad too often, which sounds excruciating after a point (especially during the moderately prolonged climactic 'talkathon' between himself and Shakthivel), it always helps that Mohanlal is the one delivering these lines. The way he emotes in the hospital scenes is a vivid lesson for aspiring performers - simply breathtaking!Manju Warrier, in a poorly written character (of Mathew's wife Neelima), does a great job with respect to what the script offers her. When Mohanlal and Manju Warrier (two of the most bankable actors of Malayalam filmdom) share the silver-screen, the chemistry is by- default electric, even when their lines let them down. 'Villain' is a botched effort no doubt, but the ensemble (Siddique, Ranji Panicker, Raashi Khanna and Chemban Vinod to name a few) makes us buy into the proceedings to an extent.Music (by 4 Musics) is serviceable for all it's worth - we will be forgetting most tracks as soon as radio stations surrender their fixation on them. Background score by Sushin Shyam complements the film's vibe perfectly. Stunts by Peter Hein are just about adequate, without being overly 'massy'. Editing (by Shameer Mohammed) could have been tauter (chiefly in the second half). 'Villain' could easily be regarded as one of Unnikrishnan's better films but that just isn't enough for it to be deemed a compelling fare on the whole.Verdict: Plenty of reasons to give it a miss, but one magic word pretty much outdoes it all - Mohanlal!